Do Unwed Fathers Have Rights in Georgia?

by Sharon Jackson  on August 19, 2021 under Father's Rights,Legitimation 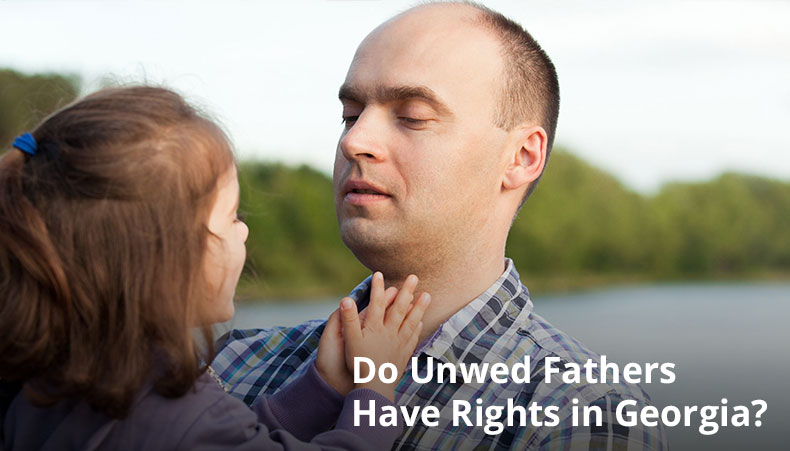 A father’s rights are clear when he is married to the mother of the child, but if dad and mom are unmarried, legal questions typically arise.

Do biological dads have legal parenting rights? Can an unmarried father get child custody? Will he have to pay child support?

In Georgia, answers to these questions are anchored on two key concepts: paternity and legitimation.

A child custody lawyer will work through your case with you and ensure that your parental rights are protected.

What are Paternity and Legitimation? What’s the Difference?

Paternity refers to fatherhood in a biological sense, while legitimation refers to the legal recognition of fatherhood.

Under Georgia law, paternity alone does not give a dad legal parental rights. He can only have these rights once he has legitimized the child.

Paternity is established by putting your name as the father on the child’s birth certificate, accomplishing the Paternity Acknowledgment Form, or confirming fatherhood via a DNA test.

On the other hand, legitimation is a process that you have to initiate with the court by filing a Petition for Legitimation. This procedure can get complicated, especially if the mother objects to your legitimizing the child. It is helpful to have a Family Law attorney on your side.

The only other way to legitimize the child is by marrying the mother. However, many fathers are unable to do this, hence they need to file a petition with the court.

Rights of a Father Outside Marriage in Georgia

Let’s look at an unmarried father’s rights in various scenarios.

Does an unwed dad have parental rights if mom is married to someone else?

In traditional circumstances, the man who is married to the mom during the child’s birth or nine months before the birth is automatically considered the “presumed father.” He will have legal parental rights over the child, unless and until this legal parentage is disproven in court.

If you are the biological father of the child but are not the man married to the mother, you can pursue legal parentage through legitimation. Only when you have the court’s Order of Legitimation will you have parenting rights.

Does an unwed father have parental rights if he pays child support?

In Georgia, establishing paternity could allow a mother to obtain child support from the biological father, even if she was never married to him. However, paying child support does not give the unwed father parental rights. He will still need to legitimize the child if he wants to have fatherly rights under the law.

The same applies to unwed dads who shoulder child-rearing expenses such as tuition fees and medical care. Just because you are paying these fees does not mean you have legal rights over the child. You still need to complete legitimation.

Can a father get child custody if he was never married to the mother?

Unwed couples may decide to separate even if they haven’t been married. When this happens, the unwed father may fear that their child would be relocated away from him or barred from seeing him. Child custody is a major concern for many unmarried dads.

In this scenario, the mother has sole parenting rights, but as the father, you can complete the child legitimation process and then fight for child custody.

Becoming the legal father does not automatically give you custody. You will still need to go through the usual procedure of a child custody case wherein you have to prove that staying with you is in the child’s best interests. You and the mother will now have equal legal footing, and it is up to the court to determine the child custody and visitation arrangements.

It is normal for unwed fathers to have concerns and questions regarding their parental rights. If you wish to have legal parentage of your child, you don’t want to make mistakes that could hurt your claim. It is wise to consult with a family law attorney.

In the greater Atlanta area, Attorney Sharon Jackson is trusted by parents like you trying to protect their rights in confusing family situations. Ms. Jackson combines 16+ years of legal experience with her sensitivity to family dynamics, helping many Georgia parents secure positive outcomes for themselves and their children.