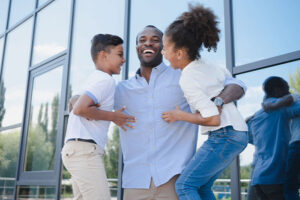 Paternity law focuses on matters such as child custody, child legitimation, which is the acknowledgement of fatherhood, as well as the question of paternity itself. These are complicated legal issues in Georgia best handled by an experienced and compassionate paternity lawyer.

Fathers have equal standing with mothers before the law. Georgia law does not automatically favor mothers over fathers. Their courts instead place the greatest importance on what will be in the best interests of the child, regardless of the parent’s gender However, legal complications arise if the dad is not married to the biological mom, or if either parent is disputing the dad’s paternal rights. Let’s take a look at how paternity laws in Georgia work.

If a child is born during marriage, the husband in that marriage is presumed to be the child’s father. But if a child is born out of wedlock, a person could find it challenging to claim that he is the legal father – even if he is named on the child’s birth certificate.

Many people assume that once a person’s paternity is established, he will automatically have legal rights as a parent. But in Georgia, there is a clear difference between paternity and legitimation.

Paternity pertains to a person’s biological fatherhood of a child, while legitimation is the legal acknowledgment of it. Being the biological father does not automatically entitle a person to legal parenting rights. To establish one’s status as a legal father, he has to accomplish the process of legitimation.

In fact, in the noted case of Ghrist v. Fricks et al., Georgia Court of Appeals concluded that “paternity and legitimation are not the same thing… [A] man has no absolute right to the grant of his petition to legitimate a child simply because he is the biological father.” Instead, the court has a “duty to inquire further into the best interests of the child” before granting parental rights to the petitioning father.

A Father’s Rights And Obligations – Paternity And Legitimation

The subject of paternity and legitimation quickly becomes thorny, especially when unmarried parents argue over questions like “Should the biological father pay child support? Can he get custody of the child?”

To answer these questions, here are some important rights and responsibilities of unwed fathers under GA law:

How A Father Can Legitimize A Child In Georgia

There are several options for child legitimation for an unwed father in GA:

As if the laws are not tricky enough, many family situations make it difficult for parents to secure what they think is best for their child. There are fathers who are denied their rights to raise or even see their child. There are mothers who struggle without the support of their child’s father. The emotionally-charged disputes and sensitive personal matters only make these cases more challenging.

Attorney Sharon Jackson is adept at handling family law issues. Whether you want to claim your fatherhood rights, or you wish to assert someone’s parental responsibilities, Ms. Jackson can provide the legal guidance and representation you need. Call today at (678) 921-3480.