by Sharon Jackson  on July 13, 2021 under Military Divorce 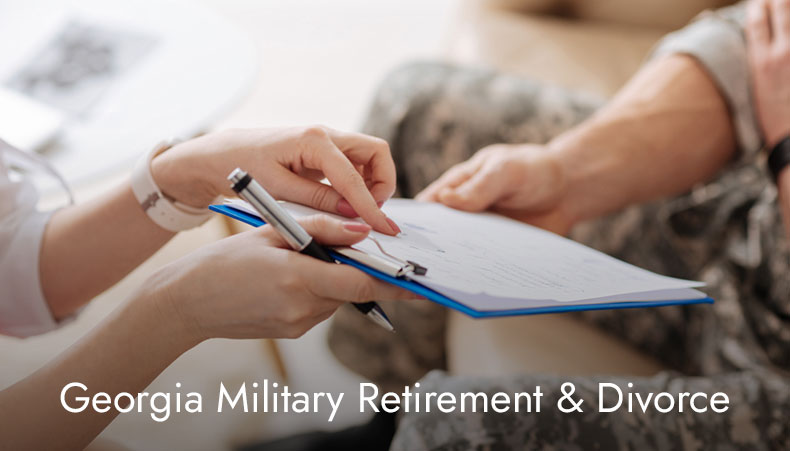 When married couples decide to go their separate ways, there are plenty of decisions to make, and every move they make could have long-standing ramifications for the family.

Military personnel may also have additional laws to consider. These laws will impact divorces involving property division, child custody and support, and alimony.

In particular, most military spouses may be concerned about the division of the retirement pension. Here are some important aspects to keep in mind about military retirement pay and divorce in Georgia.

A Georgia military divorce lawyer will help to ensure this process goes as smoothly as possible.

How is Military Retirement Pay Divided in a Divorce?

In particular, service members and their spouses are subject to the Uniformed Services Former Spouses’ Protection Act (USFSPA), which determines how military retirement benefits are calculated and divided in divorce proceedings. For example, the division of retirement pension is limited to non-disability benefits.

The former spouse also cannot get more than 50 percent of the disposable retired earnings. However, this may be increased to 65 percent in cases involving child support or alimony.

There are different ways to divide military pensions, including the following:

These methods have their own set of pros and cons. It’s best to speak with a divorce attorney who has experience handling military divorces to determine which one best suits a specific case.

What is a Retired Military Spouse Entitled to in a Divorce?

It is important to keep in mind that while a former spouse’s rights are protected under federal law, they don’t automatically get the right to the military member’s pension. To collect a portion of this pension, the former spouse must be awarded such in the final divorce decree. The amount of money they’re entitled to will be determined by the court.

A former spouse may also retain medical coverage and commissary, exchange, and theater privileges as long as they remain unmarried and meet the 20/20/20 rule:

How Long Do You Have to Be Married to Get Half of Military Retirement?

According to federal laws, the spouse of a military member is only entitled to the part of their pension only when the two parties have been married for a minimum of 10 years while the military member was on active duty.

However, a state court can also award a share of the servicemember’s pension to their former spouse even if the marriage only lasted less than a year.

If you’re wondering what you’re entitled to and what your rights are under a military divorce, get in touch with a divorce attorney as soon as possible. They’ll help you understand your options and make sure that your interests are protected throughout the proceedings.

Our team at Sharon Jackson has extensive experience handling military divorce cases. We’re here to help. Contact us today at (678) 909-4100 to schedule a consultation.